The Tesla Coils is a competitive FRIST Tech Challenge (FTC) Robotics Team in the Twin Falls/Magic Valley area.  They began competing in the 2011-2012 season, competing in a game called “Bowled Over”.  They had a great first season, advancing to the FIRST (For Inspiration and Recognition of Science and Technology) World Championship. Attendance at the World Championship has been a common theme with the “Coils”, as they have now competed at 5 of the last 9 World Championships.

The official name of our JOI Club is The Smarticle Particles. This name was chosen to distinguish the JOI Club from the Tesla Coils, its primary FTC team, and to allow the JOI Club to encompass more than one competing team.  Over the almost 6 years of existence, the JOI Club has been made up of club members from the Tesla Coils, Animosus, and The Rifters, another rookie team sponsored by the Coils.  The JOI club also sponsored and mentored a team called the Technolots, from Magic Valley High School.  This team was not a part of the club but received material support and mentorship for its 3 seasons. We also sponsored and mentored the RoboRavens from Pearland, TX during the 2019-2020 season and look forward to continuing that mentorship in the coming seasons.

Our JOI club is much more than just building and competing with robots.  Each season is filled with a huge educational experience that begins the moment one season ends.  Typically, a season ends in March unless the team advances all the way to the Worlds Championship then it ends at the end of April. The new season always begins on May 1st.  The teams at this point have already begun scheduling summer camps in partnership with CSI in Twin Falls, Jerome and Burley, the CSI refugee center, and the Grangeville School District.  These camps are amazing teaching opportunities for the youth in our club, teaching them leadership skills, how to work with younger children, and how to overcome obstacles they may not face otherwise.  They are also a source of funding for our teams, and an opportunity to recruit interested youth to join our teams.  Our teams combine for over 1,400 service hours a year, teaching youth about STEM around Idaho, and volunteering at many fundraisers and city events.

Throughout the season, each team has to focus on much more than robot building.  The team members all gain skills in public speaking, videography, photography, accounting, conflict resolution, fundraising and sponsorships, CAD design and robot design, and programming to name a few. Learning all of these skills have helped our JOI Club teams win several Inspire Awards, state championships, Collins Innovate Awards, Robot Design Awards, Motivate Awards & Connect Awards over the last 6 seasons.

Our JOI Club and the Tesla Coils are proud of all of our club Alumni that have graduated and moved on to higher education.  Several of these alumni students are married, and most have graduated from universities, or are near graduation.  They have attended school in many fields, including Computer Science, Phycology, Material Sciences and Mechanical Engineering. We even have our first Tesla Coil grandbaby, arriving in August 2020! We look forward to seeing what our JOI Club does in their 2020-2021 season. You can follow the Tesla Coils via their Facebook page. 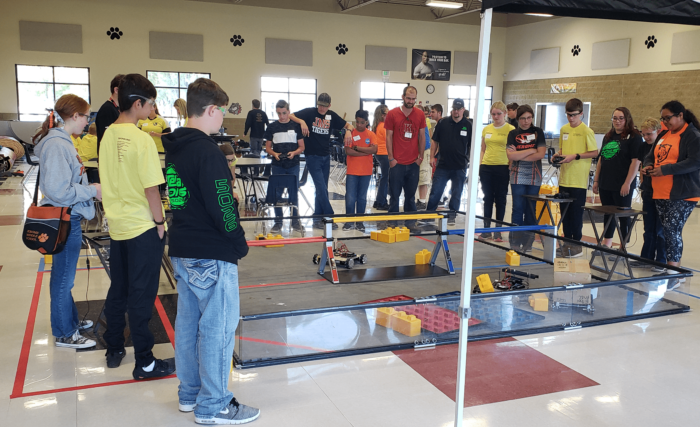 We planned this season's kickoff to be hands on. We prebuilt several different chassis styles so everyone could drive each of the different styles. The High voltage Couch Bananas made two of the chassis for us.